I've been working on pieces for the upcoming exhibit at the NC Arboretum. Some of the work originated as samples for various workshops I've taught. One such workshop was silk painting which I taught for years at the Spruill Center for the Arts in Atlanta, GA. It was a basic, entry level of silk painting where students learned both the watercolor wash technique as well as using a resist. 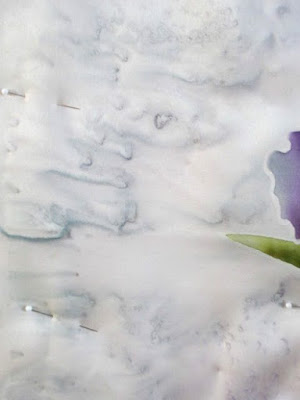 The watercolor technique uses a wash of paint applied to the surface. Silk paint is very watery and knows no boundaries. Sprinkling salt on the surface while it is still wet creates a beautiful effect. The salt will pull the paint towards itself creating "traveling" lines. Using different size salt grains also affects the results. Table salt which has a fine granule, creates a more narrow line; kosher or sea salt which has larger granules will create the effect you see above. 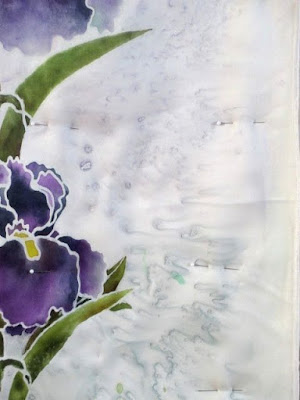 The darker dots indicate where the salt was and the paint accumulated in that area. I love this technique as it creates such an interesting but not overwhelming background. Several colors were used to create the background making it more interesting. The silk paint was watered down to make it more subtle. 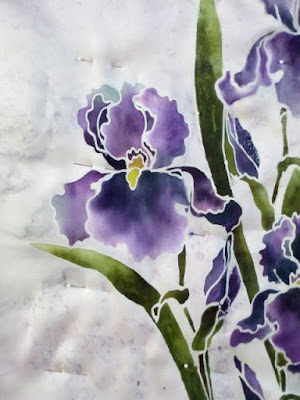 Next came the painting of the design. Since the paint is so loose, you have to use a "resist" which creates a barrier and keeps the paint within the lines of the design. The design was lightly traced onto the silk. A water soluble silk paint resist was applied to all the lines. I used a little squirt bottle to create a thin line. After it dried, it was time to apply the paint. Silk paint can be a strange animal and tricky to use. You have to work with it quickly as it dries fast creating hard edges. This makes it difficult to blend with another color . 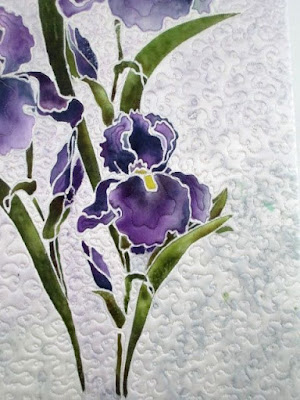 The piece was layered and quilted with a rayon decorative thread in a fairly simple design. The piece was mounted onto stretcher bars which is a favorite method for me as it looks very polished. 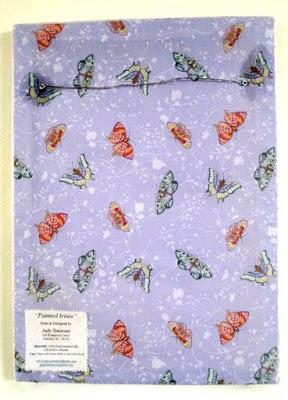 The back was also finished to cover all the staples etc. used to pull the piece to the back. I used picture frame wire and eye hooks for hanging. 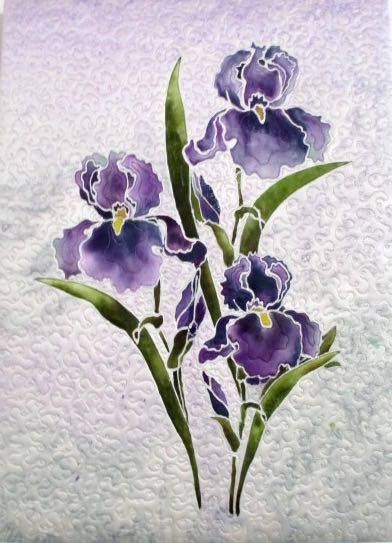 And the finished piece  - "Painted Irises" which will work well for the arboretum as they really like nature themed pieces.
Posted by Windy Hill Happenings at 5:28 PM 12 comments:

My husband John has been a woodworker for many, many years. I remember the first thing he made for our first apartment - a set of bookcases out of plywood. I thought they were the cat's meow. Now when I look back...not so much but it was the beginning of his love affair with wood.  He has made much of the furniture in our home and seems to have a never-ending list of projects. His next is a new dining room table for our daughter for her big "40" birthday - wow, am I that old to have a daughter turning 40!! 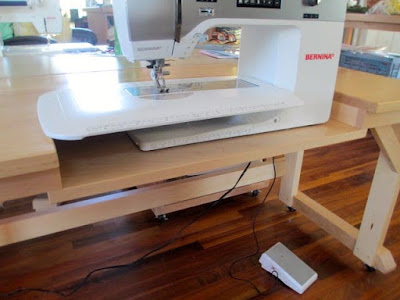 Well, I have a new Bernina much bigger than others I've had; the tables he made for them don't fit this big baby, so I placed my order for another one. John loves to work in hardwoods. This was suppose to be a quick and easy, strictly functional piece. He chose Hard (sugar) Maple which is very hard and has a beautiful grain. 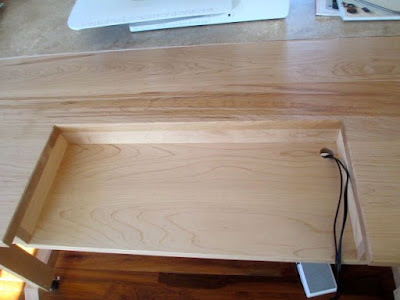 He designs it so the table drops down to allow the machine to set into it and be flush with the top of the table. It's a great design idea and so gentle on the shoulders; I'm at a perfect angle. 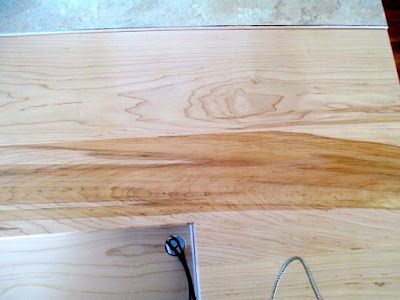 The grain is so interesting. He purposely used this beautiful piece in a very obvious place on the table. 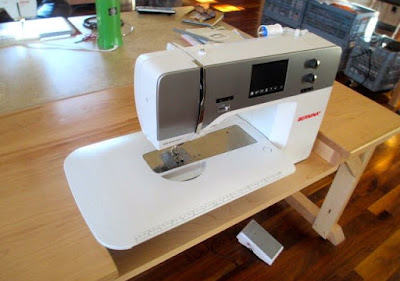 It's a wonderful setup and is flush against another table giving me more room when working on a larger piece. I must say I'm lucky to have this great new table and even luckier to have such a sweet hubby to make these things for me. Thanks John!

I have been busy creating pieces for an upcoming exhibit I'm doing with 2 friends at the NC Arboretum. Kate, Mary and I have done an exhibit there before; they give us the entire second floor to fill with our work. It's great fun and a wonderful opportunity to show and sell our work. The arboretum being nature orientated prefer that we exhibit things nature related - easy for the 3 of us as we all have done many pieces around that theme. I've been making some smaller pieces in a 9 x 12 size and using a pre-stretched canvas as a mounting board. 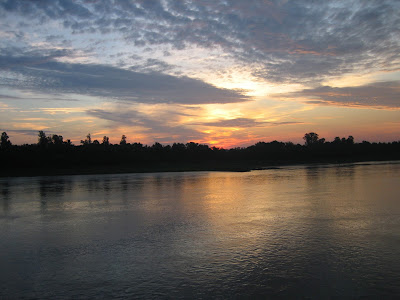 My inspiration for the piece was a photograph featuring beautiful skies and sheer leaves in front. I always use my own photographs when printing on fabric...making it more personal and also to avoid any copyright issues. I took the above photograph on one of my travels. I needed to make it into a portrait orientation. I also knew that printing this photo would give me an 8 1/2 x 11 size which would be way too small. 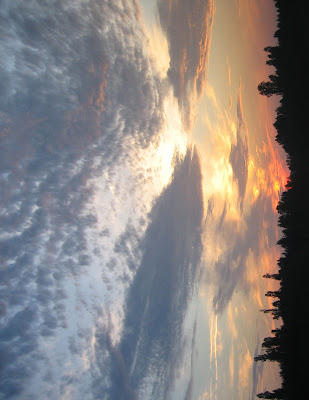 I needed to cut the photo in half after putting it in photoshop and making it a vertical orientation by unchecking the "constrain proportions" box allowing me to adjust the sides to any size. With some photos, doing this can distort the image but with nature, it usually works just fine. 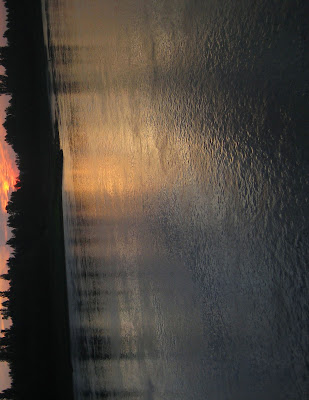 I was able to print each half of the photo into 8 1/2 by 11 prints, making it large enough to mount onto an 9 x 12 canvas and wrap around to the back. 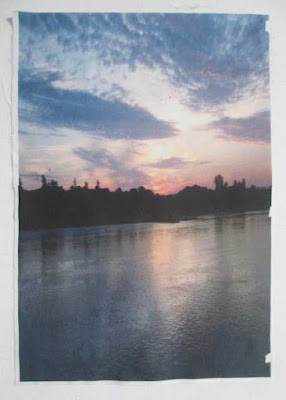 The 2 halves were joined together by fusing a small strip of fusible web (around 1 ") along the top edge of the bottom photo, laying it over the top photo and fuse into place. It would be very obvious if you did a straight cut and then fused. It's better to cut along an uneven edge - in this case, the tree and building silhouette. Up close, you cannot see where the 2 pieces were joined which was my goal. 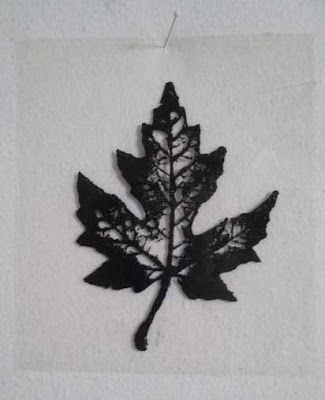 Next came the leaves to use as overlays. I had several options and made samples to see what created the most pleasing effect. I was working with organza which is very sheer with lots of body. The first sample was a silkscreen with a dark gray/black paint. It was way too heavy. 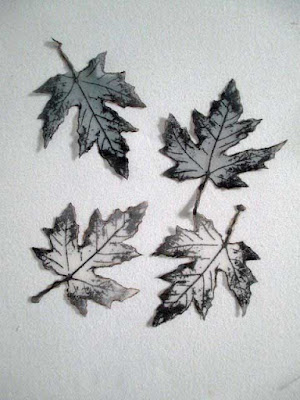 I
I loved the leaf and screened it on paper and then removed a lot of the dark areas using white out. From that new print, I was able to make another silkscreen which has a lighter look. After screening this onto organza, they were cut out. I liked the new look but thought they still might be too heavy. 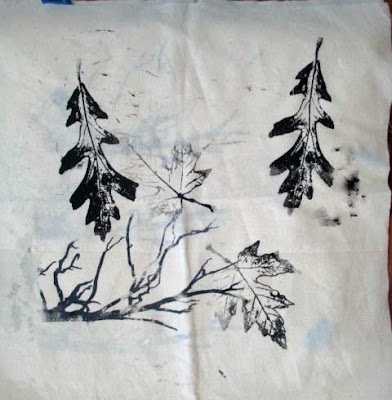 Throughout the process, I used a padded surface. Since organza is so sheer, much of the paint seeps through to the padding to create some really great images and fabric. 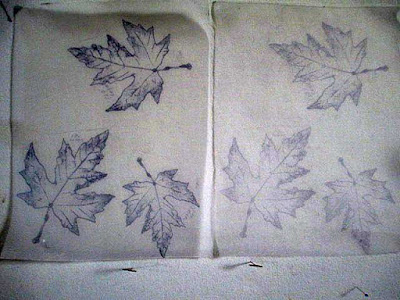 My next option was to print these leaves onto organza using an inkjet printer. Inkjet images are much softer than a silkscreen which uses paint. 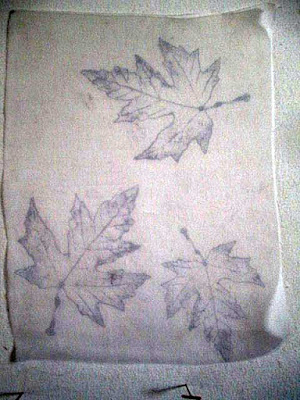 I think I like this look better. The images were cut out and the edges burned with a wood burning tool giving a nice look to the edge which is obvious in the finished piece. 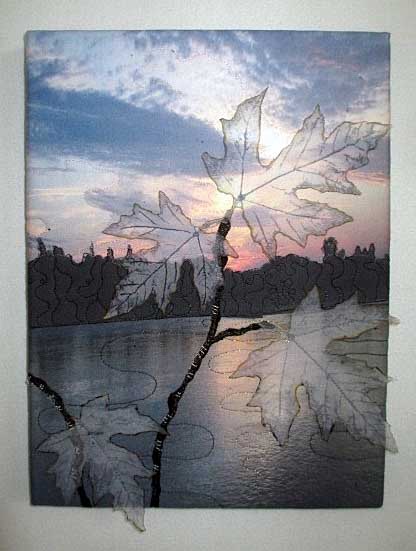 A branch was machine embroidered onto the surface. The leaves were attached using a monofilament thread stitching down the vein lines. I look at this piece and the first thing that comes to mind is a quiet, peaceful place hence the name  ...."Solitude".
Posted by Windy Hill Happenings at 5:25 PM 6 comments: