Sometimes you just have to cut your losses..

like with this piece...which I really wanted to work. During my teaching career, one of the workshops I taught was "Bobbin Couching and Stumpwork" which involved working with heavy threads in the bobbin.This is a great technique when you want to use a heavy thread for texture but it's too heavy to fit through the eye of a needle. Winding it on the bobbin and working from the back so the heavy thread appears on the front is the way to go. Couching is the overall design you see in the center; the stumpwork is the heavy build-up of threads you see on the applique edges .The original sample looked a lot like this. When I finished teaching, the original was turned into a small wall hanging with an appliquéd tree in the middle. It was part of an exhibit/sale at the NC Arboretum and did very well, especially since it embraced a nature theme which the arboretum encouraged. 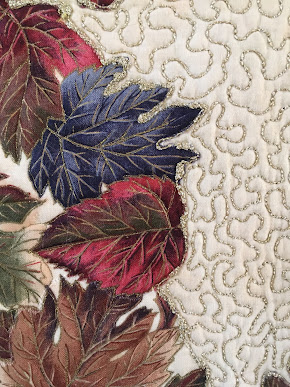 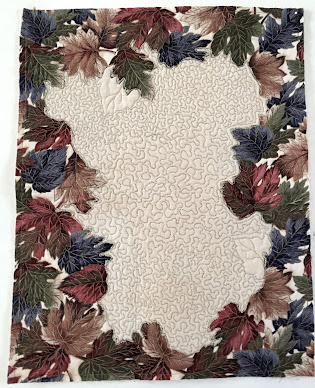 The second piece (above) was the one I had set up to demo on...it also appeared to be the beginnings of a nice piece or so I thought. 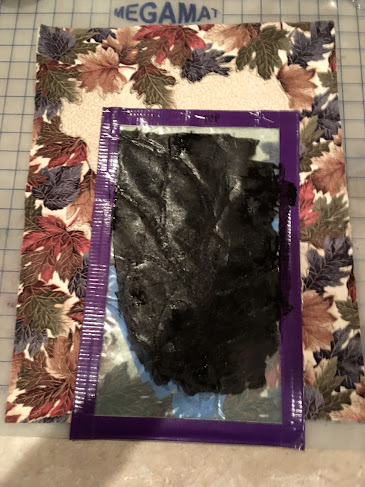 Instead of doing an applique of a tree, I thought to use a silkscreen. Now I should know better to always make a sample first, but I was in a hurry and took the shortcut which lead to poor results. The paint I used is a fabric friendly paint which means it contains a special binder making it permanent on fabric. It's made by Speedball and very thick making it ideal for silk screening...You can see how dark, heavy and "globby" (new word) the image is. It has nothing to do with the paint itself...just the screen image was a poor choice.  I should have chosen something more delicate.....AND TESTED IT! 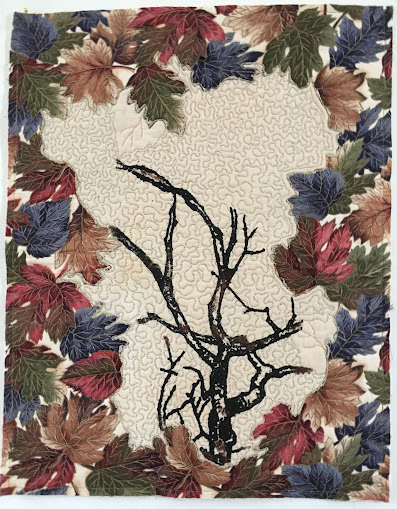 So here is my big mistake and I hope I learned a lesson to not be in such a hurry and do a little experimenting before diving into the final piece...So maybe I'll be able to get a few cards out of this...we'll see...
Have a great day and til next time.
Posted by Windy Hill Happenings at 10:51 AM