"Autumn on the Blue Ridge"

I've been working on pieces for an upcoming show at the Focus Gallery at the Folk Art Center in Asheville. I developed this technique many years ago; it was well received and thought since the exhibit will be up during the fall, might be nice to bring it back with some changes. 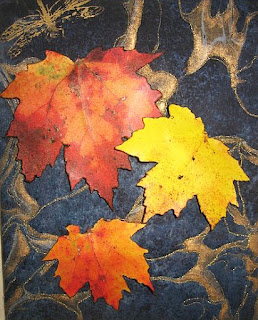 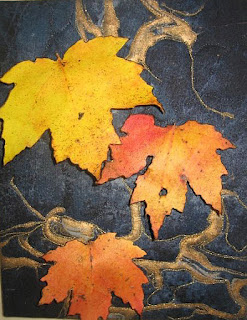 I started with Stonehenge fabric to use as a background; I wanted more veining to give it a more "rock-like" appearance.  I marbled with metallic gold which was quite subtle but then went back and free motioned quilted around the lines and filled in with a paintstick. I marbled on many different fabrics in the Stonehenge line but found I liked the navy the best as it was very dramatic and showed the leaves well. I also marbled in different sizes which would eventually be wrapped around frames my husband made. It's the same thing as a museum wrap only no canvas is used. I really like the canvas wrapped pieces you can buy, but their sizes are so specific and didn't always work for me. The above piece is a 10" x 17". 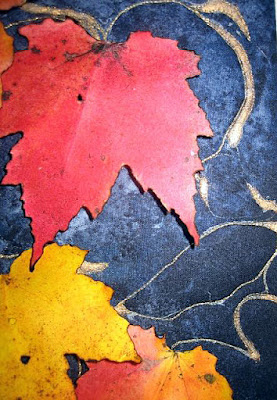 Here is a detail of the piece right above it. I start with real leaves which are photocopied so I have a permanent record. They are transferred to a special paper and then to silk. I also wire them with a fine wire to give them more dimension and allows them to pop out from the background. 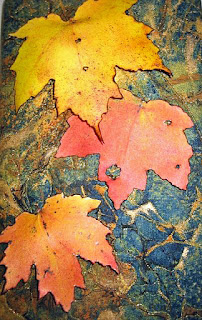 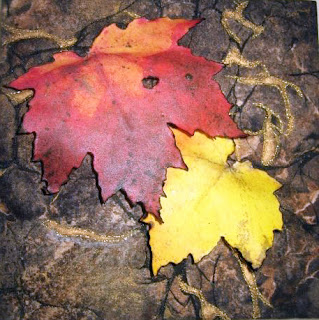 The fun thing about this technique is if you put the real leaf up against the silk one, you cannot tell them apart - pretty cool. Being July I didn't have access to any fall leaves but have a notebook full of copies. The 2 above are an 8" square and a 6" x 10" on right. 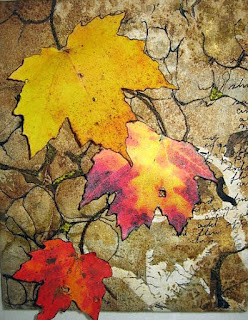 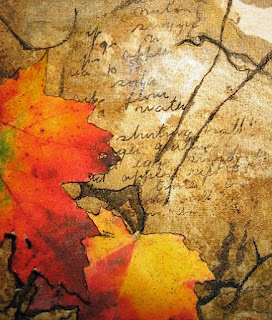 This was my other favorite Stonehenge - a beige and grayish color. The marbling did well. I also did some silk screening on some which included old family recipes as I like the writing and you often find writing on rocks (well, maybe not a recipe, but artistic license here) The above pieces are 8 x 10. 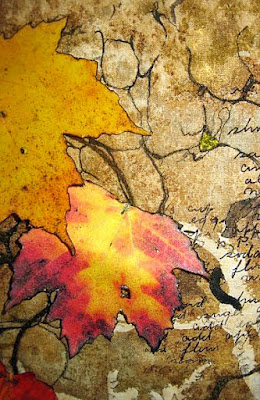 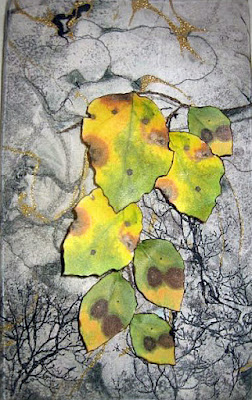 Fall leaves are the most popular but also wanted to do a few using other types of leaves - the Birch tree leaf transferred well and some ivy below. Both have some silk screening on them for additional interest. I have called this series - "Autumn on the Blue Ridge" as riding along the parkway in the fall is glorious with color. 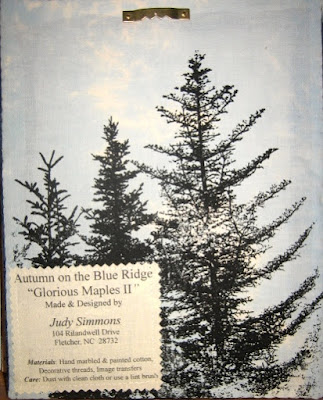 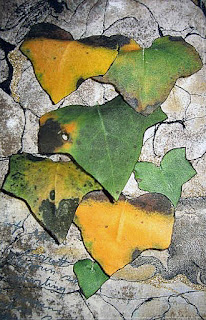 The backs are screened with pictures of trees I took along the Blue Ridge Parkway and made into screens. I'm still working furiously to get more done, also have a big piece in mind using a water wheel I photographed while at the John C. Campbell school last fall.
Posted by Windy Hill Happenings at 10:28 AM