I've been doing some ice dyeing in preparation for the Southern Highland Craft Fair coming up next week. I found a good system for laying the scarves on top of the trays. I bought some vinyl shelving at a home improvement store - 24" wide and 6' long.  I was worried about the lip on the front side of the shelf - maybe preventing it from lying flat. But the trays were 22" wide and the shelving cleared it. Perfect, off to a good start. 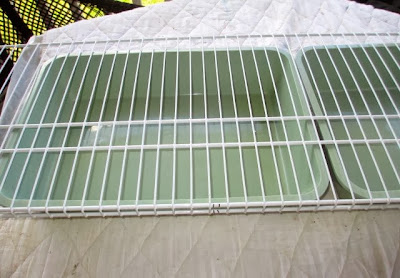 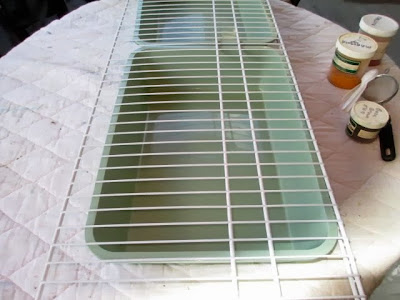 and the shelving on top giving me a long continuous working area although I did keep the scarves separated because of color. 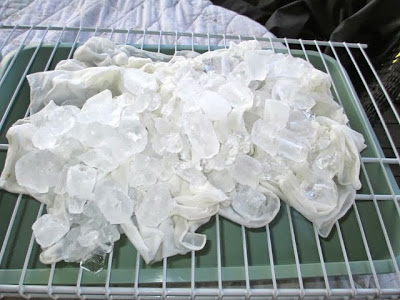 I've been using a lot of bamboo rayon and love the results.  A while back I ordered one of each kind of rayon scarf (they had bamboo, regular, shawls etc.) plus a yard of rayon to see how they would work with this technique. I've used rayon before with the procion mx dyes and they do very well so I thought - why not. 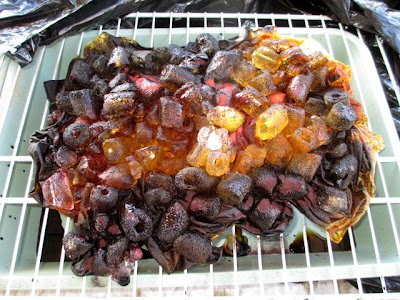 I didn't use the crushed ice this time around as I didn't have an ice crusher. These two batches were done side by side with about 8" to separate them. 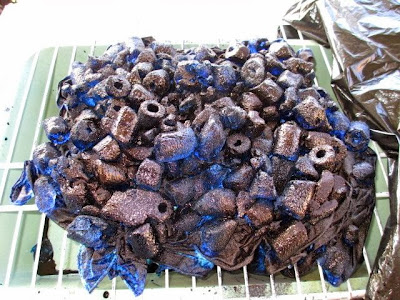 The gold, mustard and brown were first, left uncovered while I worked on the second set of navy, electric blue and royal blue. Some of the sneaky little blue dye particles wandered over into my gold scarves.

What a surprise when I uncovered them the next morning to find this. You can see - this scarf was closest to the blue batch and reaped the benefits of migration.  I really liked the effect and am wanting to try this again.

I really like using ice - it creates such a crystalline effect. 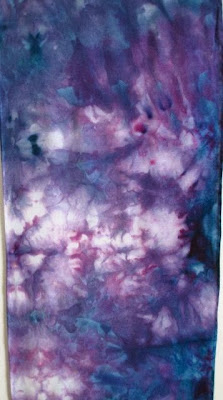 I wrote down the colors I used - something I usually don't do as it really doesn't matter but in this case, making scarves to sell - thought I should have a record. I used 3 different blues on this batch and was so surprised to see the amount of purple. I had to go back and check to make sure I really used all blues. 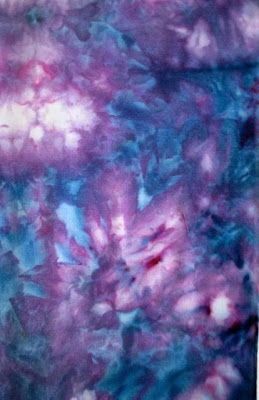 There was a lot of color splitting with this group of dyes, but I love the surprises - sometimes good and sometimes not so good... this time it was good. 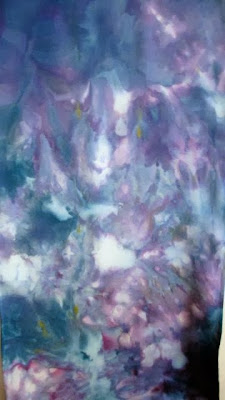 I dyed 3 scarves in each color way and depending where the dye was sprinkled, really changed the look of the scarf.  This one was a lot lighter.

Posted by Windy Hill Happenings at 9:35 AM