I haven't had much time in the studio with holidays, shopping, company but I did manage to squeeze in some sewing time over the Thanksgiving holidays. Actually, my daughter Jill, wanted Christmas pillows in plaid which were impossible to find. I knew I had seen many plaid fabrics at some of the chain sewing stores nearby so I suggested we take a look. Pillows can be time consuming but if you keep them simple - no binding, piping or fancy inserts etc., it's basically 4 seams. Well, we decided to make a flap back so a little more work but this makes the insert removable and the pillow cover washable. 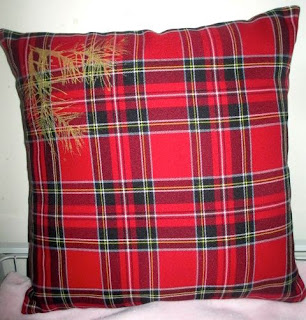 I also had a silkscreen of some pine boughs which seemed to work well in the corner. There will be some other smaller, fancy pillows in front covering up a large area so I thought putting the design in the corner would allow it to show. 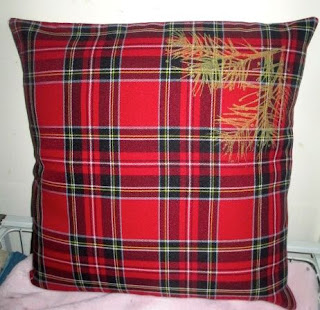 I did a mirror image on the pillows as they'll be on 2 chairs next to each other. 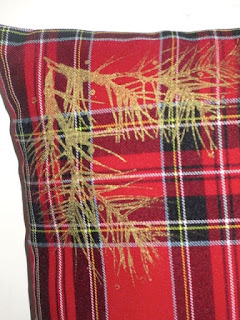 I used Lumiere paint which has a high metallic content to screen the images. 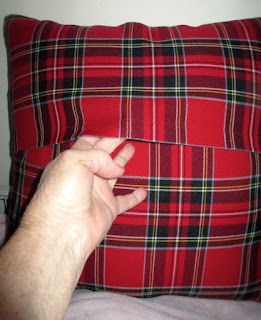 I made the flap deep enough so I wouldn't need buttons or snaps to keep it closed... 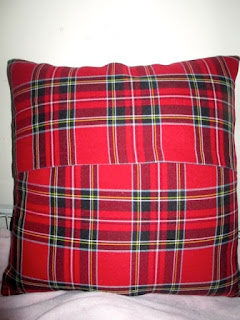 and the plaids don't match but we didn't have enough fabric to get a match....AND it is in the back...AND they are only out for a short time....AND...I know enough excuses....but they are cute from the front! 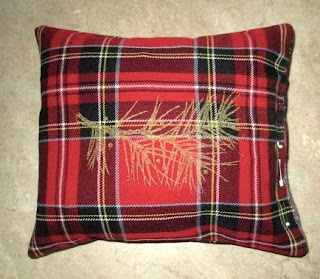 We had enough small pieces to make this very small pillow which is filled with pine needles. I save our Christmas tree from the year before out in the compost pile - a little separated from the rest When the needles dry out, I try and gather them. They make fabulous little pillows and the pine needle smell lasts for years - a fun project.
Posted by Windy Hill Happenings at 10:06 AM