I've been rusting fabric - mostly the mercerized cotton from Test Fabric which takes any kind of color beautifully. This piece was done with the intent of bringing it to a workshop I'm taking next week where we'll be working with dyes. To rust it, I placed it on top of a piece of "already dyed" fabric, knowing the other would bleed as it wasn't rinsed enough initially. I wanted the shadow of another color to appear along with the rust. 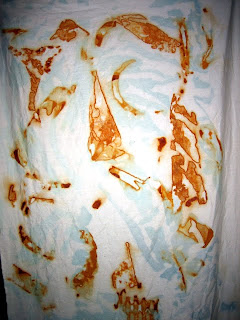 So I'll have 2 of these rust pieces to play with next week. I tried to limit the amount of rust on this one as I'll be doing "desconstructive screenprinting" on top. Sometimes I don't know when to stop; this is probably a little overdone for what I want to do with it. 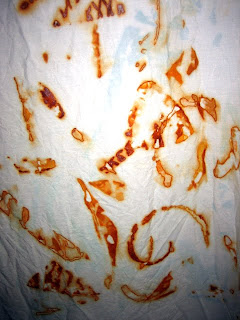 This is a piece of fabric already dyed which I rusted - the one I placed alongside the white knowing it would bleed onto it. It's hard to know what colors will work well with rust. 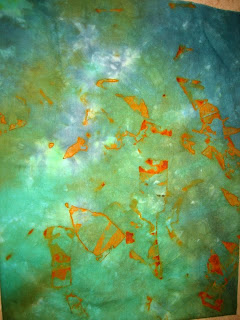 This next piece was dyed a "Marine blue"and then rusted. It's more subtle but I like it. I rusted the fabric and then overdyed. When using the mx dyes, I prefer that order in the process - rust, then dye; when using acid dyes which involve boiling, I like to dye first and then rust. I think the boiling can disturb the rust and tone it down too much. 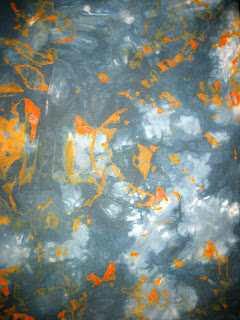 This next piece was my favorite, a mercerized cotton, rusted and then overdyed with mx olive in low water immersion in a very small container - lots of "scrunching" which results in so many lighter areas. 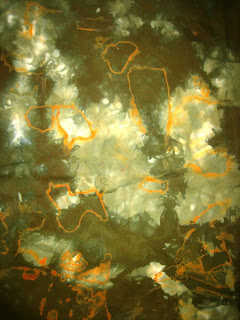 The rusted objects don't always touch the fabric completely, sometimes just the outer rim of the object and you get "lines" and "shapes". There's no way to know what's going to happen though - just a big surprise. 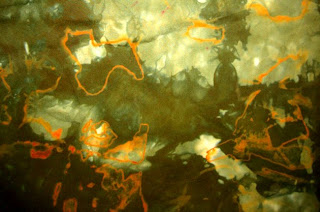 Until next time, have fun playing - inside and away from the heat! Fall is just around the corner and my fall decorations are on the edge of our storage closet, waiting to emerge and take their place downstairs until they are replaced by Christmas decorations.
Posted by Windy Hill Happenings at 6:43 PM