It all started with a coat of paint. We decided to start re-doing some of the rooms upstairs, one being a guest room.   This is one of my favorite rooms and the one my daughter and her hubby stay in when they come to visit. 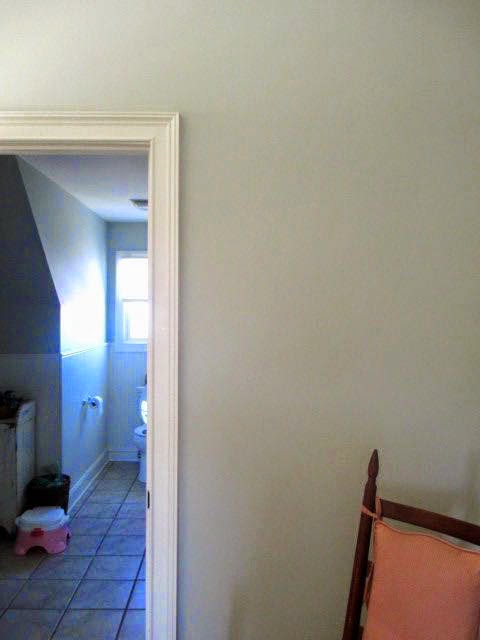 It took ten samples of different paint colors applied in 5 different areas of the room. I almost didn't have to paint as I had a "patchwork" quilt effect. We finally doctored up this color with a little more white to give it a very subtle look. We ran out of paint by the time we reached the bathroom and thought uh...oh...what are we to do, since we mixed this ourselves, but Lowes was able to match a paint chip perfectly a "whew" moment. 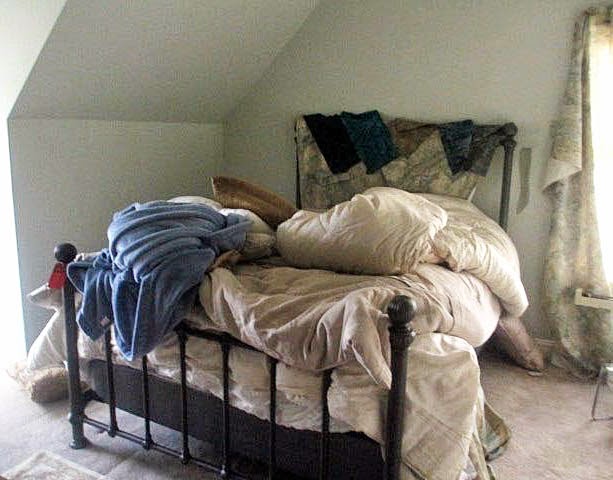 This room has always had a beautiful, but old fashioned and small 4-poster double bed that my mother had when she first married. Time to update to a queen size. We started with an "old looking" but new iron bed with a very deep mattress. Some might need a ladder to climb aboard. Finding a comforter was a challenge, brought home at least 6 huge and heavy ones. We were looking for something that would work with walls and drapes and not overpower. 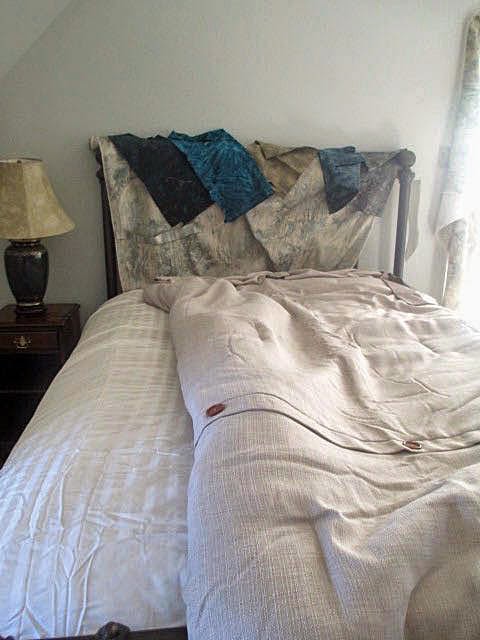 I found two I liked, especially the beige one which had great texture, got it in a full/queen size. I find when I have to buy the combination size it doesn't always work and in this case with a deeper mattress, it was way too short, so back to Belks - and no king size and also NOT  carrying it anymore. They called several Belks in the Asheville area - no luck. I asked for the number for two Belks in SC about an hour away and started calling when I got home. As luck would have it, Spartanburg had it so I made the long trek down there the following day. 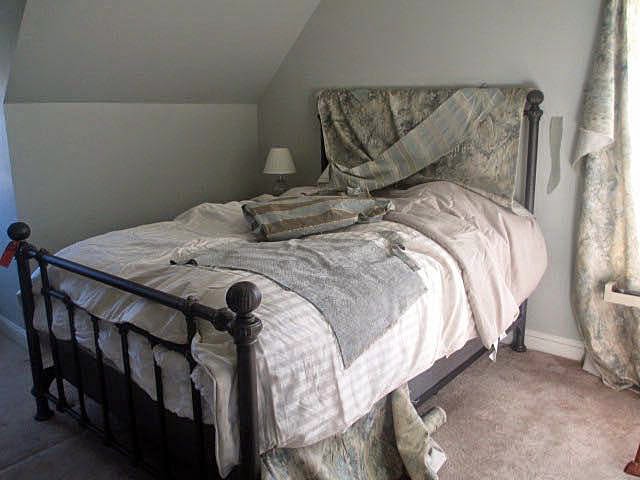 In the meantime, on the lookout for bed skirt fabric, drapery fabric, shams and pillow fabric. 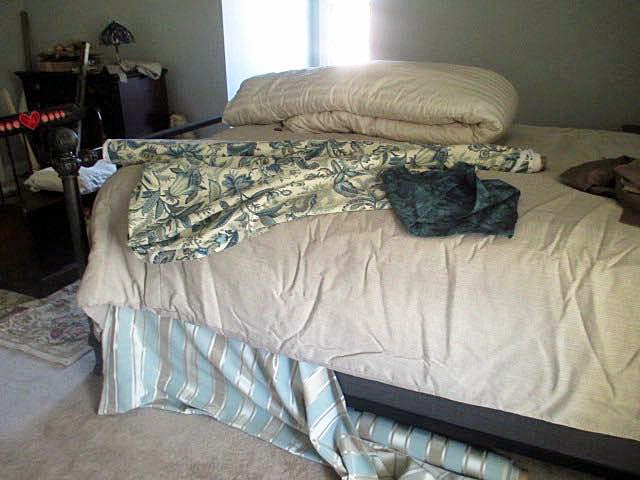 I love stripes and try to bring them in when I can. I found a really nice one that worked with the spread - it's much more subtle than it looks in the picture, the blue matches the wall. 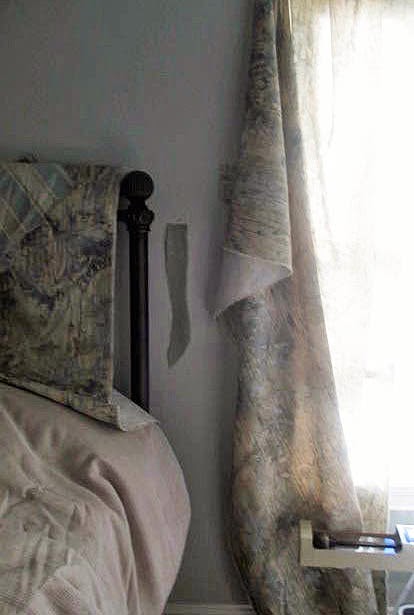 Onto drapery fabric - the one hanging was a soft water color effect - beautiful and just the type of fabric I love, but no pop and the room was already very subtle. I still bought it as it was the best choice so far - got what was left on the roll so there was no cutting which means I can return it - store policy). 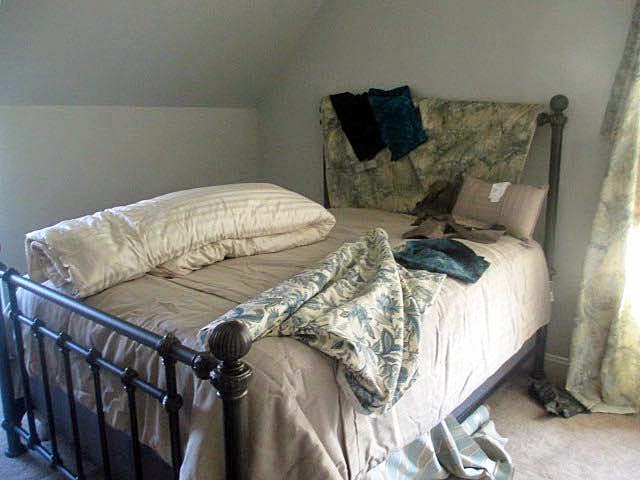 And then I found another fabric - even better as it was more lively and at Joannes also (with a 60% off sale going on) so I bought the roll of that. There was only 9 yards left but that would just make it. You can see the roll on the foot of the bed. 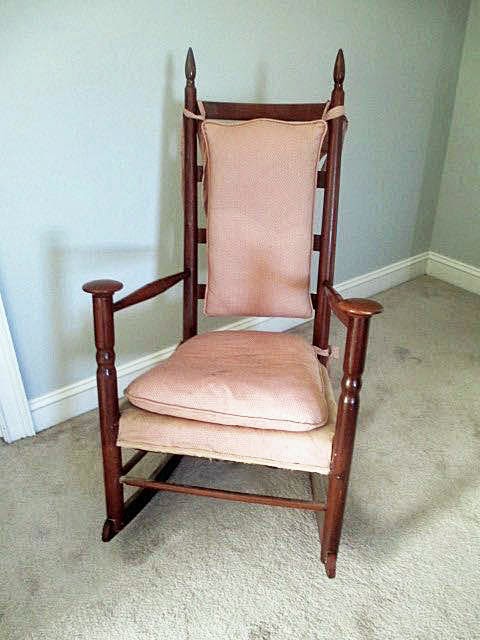 And on to my mother's old rocker. She received this as a birthday present when she was a little girl. She would have been 95 this year, had she lived, so I estimate the chair to be 80+ years old. That is the last thing I'll cover when I see how everything else is going.
So I'm up to my neck with drapery fabric, bed skirt fabric, pillows, shams, and sheers fabric and a cover for another bench in the room. You know what I'll be doing this Super Bowl Weekend (along with eating pizza).
Hope you all have a great weekend.
Posted by Windy Hill Happenings at 9:19 AM