I'm up to the the point of beading the Wedding gown. It's time consuming but also very therapeutic. I can see why people like to do this. I placed my order for beads - the Swarovski crystals and pearls in both white and parchment. It's a really pretty mix on the lace. I know I'm obsessive but I just had to know how many beads were going on this gown. I ordered 25 packages of crystals (48 to a package) and 36 strands of pearls (100 to a strand) which totals 4,800 beads + the samples I ordered initially which I'm using - so probably over 5,000 beads. If anyone would have told me ahead of time, I'ld be sewing that many beads on this gown, I would have fainted on the spot"! 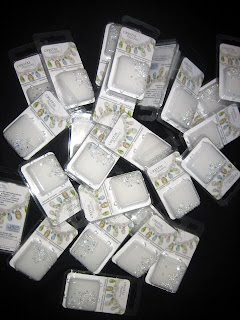 You would think that many beads would weigh the lace down, but not so. They came in a "teeny tiny" box and weighed next to nothing. 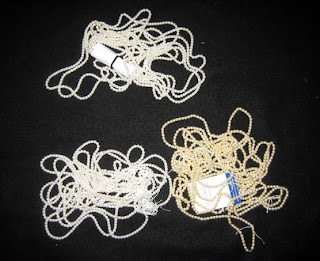 The border lace (removed in the beginning) was easy as it was so portable. I scanned the lace (below) so I could have a reference to plan the beading sequence. 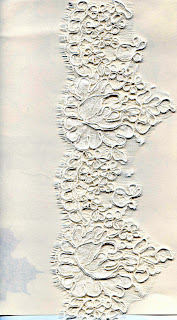 I marked red for pearls and blue for crystals. This was the only place I could do a repeat which was  nice - a no brainer kind of thing. 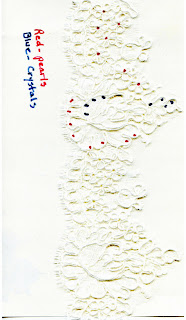 I thought about scanning the other motifs throughout the gown, 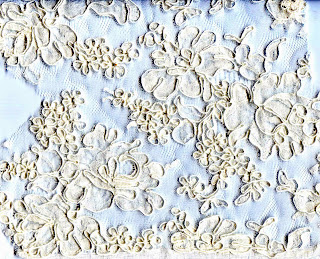 but that didn't work as far as working up a beading plan. That was because I used different combinations of motifs each time I beaded an area. Instead, I outlined the area in black thread to make it more visual for me to see. 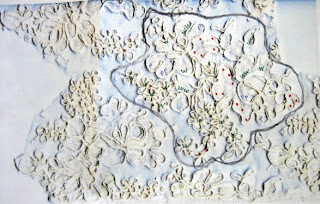 I laid the lace part of the gown on the floor (on a huge sheet) and marked off areas for beading in black thread. I took into account the way the beading would flow into the next area. 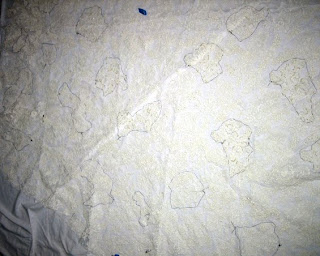 I put the lace on the dressform to see how it would look on a body. I know it's not smart to mark in a dark thread as the lint from the thread catch in the fibers and be obvious. But I used a good quality thread (less lint), did a single thread basting and a very loose stitch through the lace. It was easy to remove. It was also a great visual to see exactly where the beading would go. 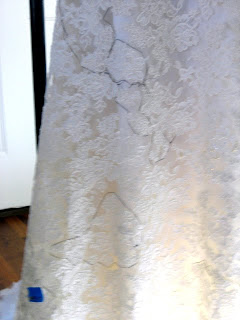 As each area is completed, I've removed the basting thread with a big smile - one more down. I must say, it's coming out very pretty, I think the beading makes the gown. A downside is my eyes get so "blurry eyed" from doing such fine work; I do have to take lots of breaks. 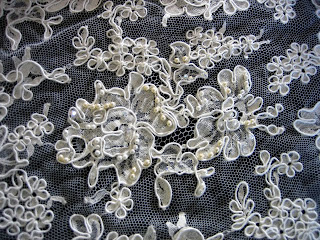 I have a new appreciation for people who do this kind of work - for me it is definitely a "Labor of Love". 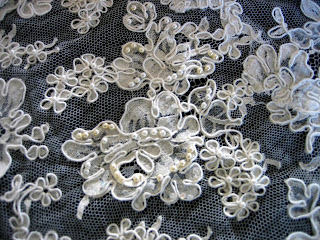 Back to the beading board.
Hope you're loving this wonderful, sunny weekend!
Posted by Windy Hill Happenings at 6:43 PM