Last week, my husband John and I went to Old Salem, NC, a smaller version of Colonial Williamsburg and a trip we've wanted to do for some time. We like seeing how towns were decorated for Christmas a century or so ago. It was a beautiful day and upon entering the village, we had to go through an old bridge with a wonderful ceiling. 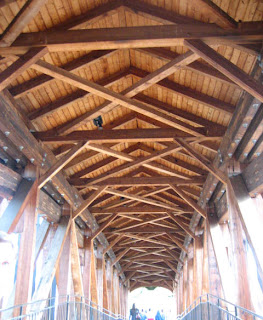 I loved the lampposts with real greenery wrapped around. Decorating was very limited back in the 18th century. In Old Salem, you have a choice of days to visit - one day is the 18th century and one is the 19th. Certain buildings will be open accordingly. We were in the 18th century when Christmas trees had not come into their own yet; had we come the following day, we would have seen a building decorated more like we do today. 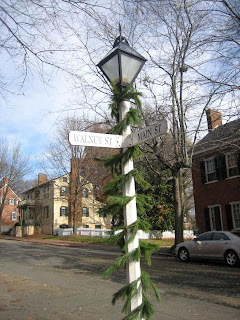 Loved this old celler used for storage and loved the rust stains on the walls. 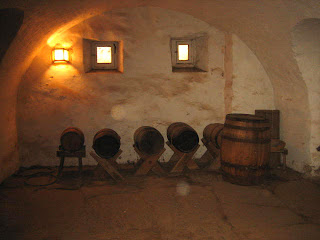 I was most fascinated by the textiles. We went to a tailors shop where everything was made by hand - hard to imagine. Measurements were taken using long pieces of paper with notches punched into them for sleeve length, waist measurement etc. Such an interesting prelude to the tape measure. This waistcoat used buttons and the buttonholes were mock ones. Closures used were hook and eyes. I was surprised to see that stitching was not finely done but crude and unattractive. 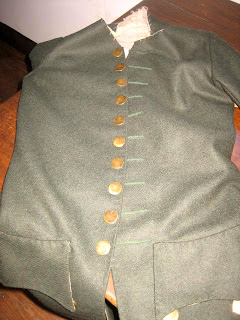 They used silk fabric to line those areas that showed and linen everywhere else. Silk, being a more expensive fiber, was used for "show" such as the sides of this jacket that might flap open and be seen(whitish area). The back, never to be seen is linen. 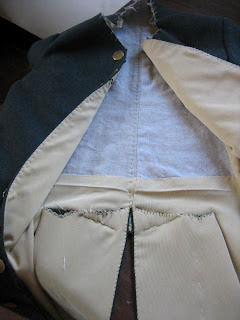 I was most fascinated by the fabric dyeing which used natural dyes. Below is Indigo which is mouthwatering gorgeous! Different values of Indigo can be achieved by numerous dippings - the more you dip, the deeper the value. 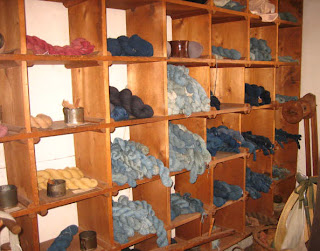 WOW! They are so yummy! 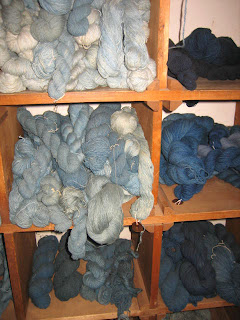 This is the kind of fireplace used to dye fabrics in large pots over open flames. 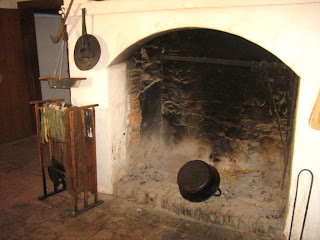 And the pots, I don't think I've ever seen pots that large anywhere except used in olden days. 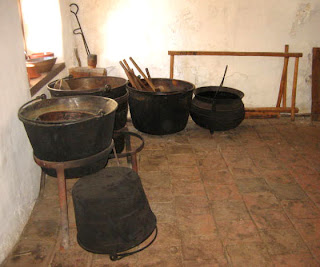 I was fascinated by this next dye pot which was permanently built into a cement structure. I wonder how the excess dye solution was removed. 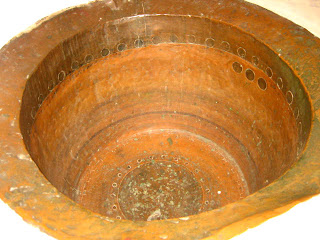 It was an interesting day. I've often thought how simple life was back then and in a way it was but then I remember how they had to wash clothes and make their own soap before doing so, and make their own bread and spin their own yarn before weaving it into cloth - etc! Guess, not so simple.
Posted by Windy Hill Happenings at 6:26 PM