The History of the Thistle

The other day when I posted my newest small work - "Thistle", my friend Nancy emailed me to say it was her favorite flower and it had an interesting history - in fact, the thistle is responsible for saving Scotland. A little flower (some call a weed) responsible for an entire country - I had to know more, so here is the story of the thistle. 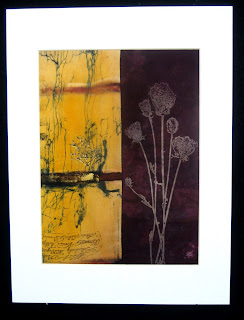 The beautiful and very prickly purple thistle has been Scotlands national emblem for centuries. It can grow to a height of 5 feet, has no natural enemies because of the sharp spines that cover and protect it like a porcupine. There are several stories that tell the legend but all seem to center around the events surrounding the Battle of Largs in 1263. For a long time, Scotland was part of the Kingdom of Norway and for a long time, Norway held little interest for Scotland. When King Alexander wanted to buy back the Western Isles from the Norse King Haakon IV, a new interest in Scotland was re-kindled. King Haakon of Norway was intent on conquering the Scots. He set off for the coast when a storm hit and his fleets were forced to land at Largs in Ayrshire. They wanted to surprise the Scots by attacking at night and removed their shoes to move more quietly. They came upon an area covered with thistles and upon stepping on one, screamed out in pain AND warning the Scots. With such advanced warning, the Scots were able to defeat the Norsemen at the Battle of Largs, saving Scotland from invasion. 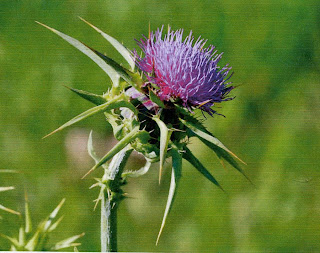 This beautiful flower saved the day and in so doing became the national emblem of Scotland.